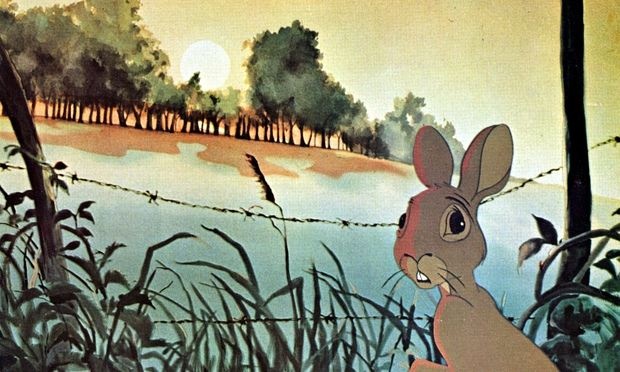 I bought a special edition of Watership Down in November. I’m a slow reader so I finished it earlier this week. It’s a really nice hard back special edition with illustrations; although the fact that I found a few, fairly obvious typos not present in the original book made me question Oneworld as publishers.
If you’re not aware, Watership Down is my favourite book, closely followed by Terry Pratchett’s The Colour of Magic. I haven’t read in a while, and I’d forgotten so much about the Watership Down book that does not happen in the movie. So here are my top… five? I can’t be arsed writing loads, things from the book.
5. Strawberry and Blackavar
Both these characters get a very limited look in the movie, but I really like them in the book. Strawberry, having come from the horrid Warren of Snares finds himself working extra hard to please Hazel and the other Watership Down rabbits, similarly Blackavar does everything he can to prove his worth having come from Efrafa.
4. Fiver Beyond
This chapter is better known as the ‘Bright Eyes’ scene in the movie. It’s a beautiful scene where Fiver trips balls and locates his dying brother. Okay, Fiver’s actually a special rabbit with a bit of a sixth sense, he can predict the future, sometimes, and sense things. It’s one of the most famous scenes in the story, and for good reason.
3. Hazel joins The Thousand
Spoiler alert. This is the final scene of the book, and movie. Hazel is laying down on Watership Down looking at the rabbits of his warren, at peace after the battled they had to make the down a safe place. As he is lying down, a rabbit comes to join him, at first Hazel doesn’t recognise him and feels bad. He then realises the rabbit is none other than the Black Rabbit of Inle; otherwise known as the Grim Reaper of rabbits. Inle assures Hazel ‘Don’t worry, they’ll be fine, and many more after them, if you come with me, I’ll show you what I mean.’ and with that Hazel’s spirit leaves his body and they exit Watership Down.
2. Dandelion
The movie didn’t really highlight this character. Dandelion is the storyteller of the group, and in Watership Down that’s a big deal. Dandelion is also really useful to the group and helps Hazel on the many outings they make, just all round he rules in the book.
1. Bigwig’s Battle with Woundwort
For two reasons, the first being that epic moment where Bigwig, in Lapine, basically tells Woundwort to ‘Eat shit and die.’ But this is the moment where Efrafa find out Bigwig was never the leader of his warren, and he acknowledges Hazel to be his Chief Rabbit. It’s a big deal in the book, because everyone thought Bigwig would be the one to cause Hazel trouble.