I force myself to write personal blogs because I used to write them weekly when I was a teenager. Granted, teenage life is so much more exciting than late twenty life. That said, this year is about to get super exciting next week.
Firstly I have Chicago next week with the DCL crew. It’s our first big meet up, which sounds crazy when you consider that we’ve all been friends for around 14 years. But with the gang being dotted all over the world it isn’t the easiest thing to organise. I’m super excited. Most of us don’t find much time to write and draw together online anymore, so it’s going to be nice to see and spend time with everyone. Expect so many drawings, photos and blog posts on it.
I’m also going to Florida with Terry, Nath and Jo at the end of July. I know, two America holidays. Don’t worry, I’ve not been able to do anything for months from saving up and paying off these holidays haha. We’re going to Disneyland, it’s going to be incredible! I am genuinely worried that I will pack an entire suitcase with Disney toys though.
Also, and I apologise that nobody will hear me shut up about this game all year, but I pre-ordered my collectors edition of Final Fantasy XV last month. I haven’t blogged about the conference yet because I’ve just had way too many chaotic thoughts on EVERYTHING that got announced. The game is such a big deal for fans, I can’t even. It’s basically make or break for a dying franchise, but if it is going to be the last one, it looks like they’re pulling out all the stops for it.

I also got a 3DS finally, well, Terry got me one – he’s awesome. I’ve been back and fourth between wanting one every time a good new game comes out that I now have a back catalogue of about 20 must play games. I’ve started with the re-release of Pokemon Blue. I let Terry name my starter Pokemon; so now it’s me and Shelly the Squirrel all the way!
Work’s been rad lately, not that it ever isn’t really. It never feels totally like work when you’re surrounded by friends /corny. But we had an epic time at WordCamp London last month, and there are more exciting events and times ahead.
In other life news, I’ve become a slave to my Fitbit. Which isn’t necessarily a bad thing but as I sit here and type I realise Mark is 1000 steps ahead of me on the weekend challenge and I must defeat him. Here are my stats from the last week. I need to tune up a little – less food and more steps. But I’m definitely more active than ever thanks to it. I even ran, like, outside. It was wild. 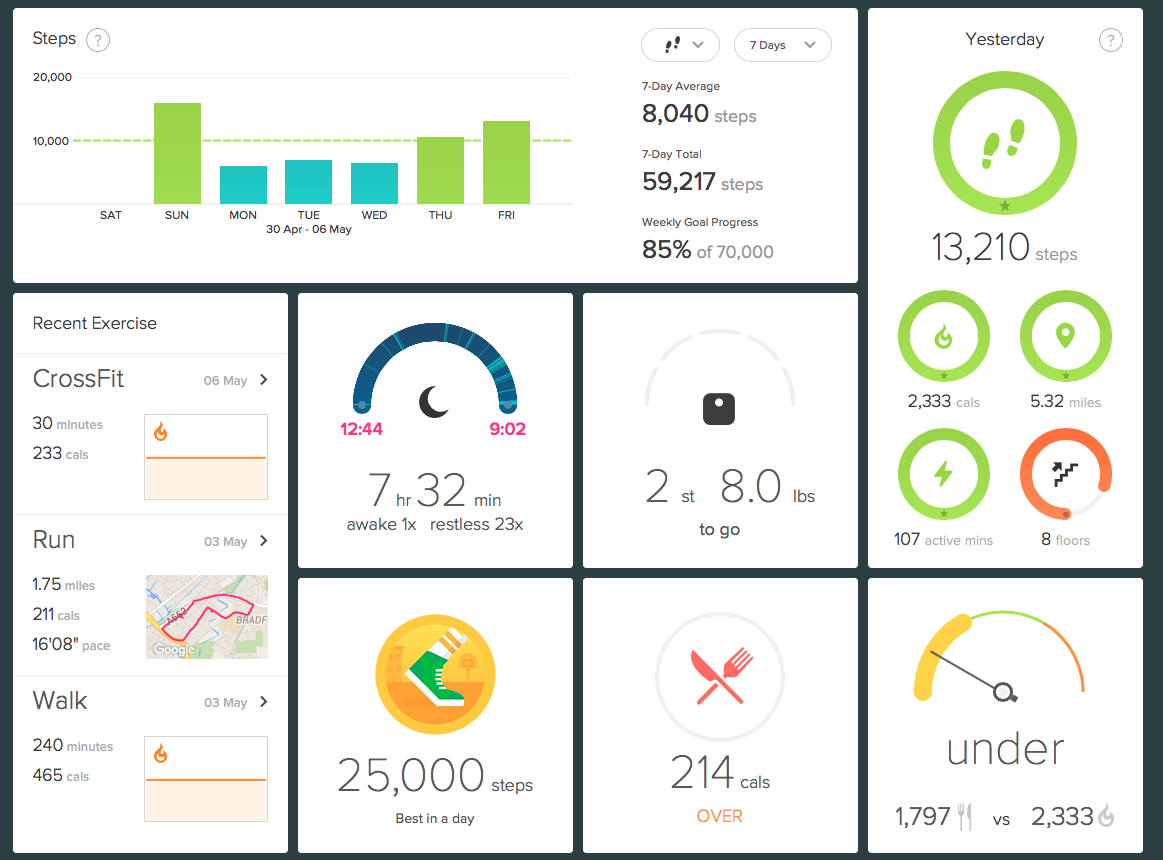