Terry and I finally got ourselves back to New York city! It’s hard to believe the last time we visited was seven years ago! New York was the first place in the states we ever visited and the first reason we fell in love with America.
I’m just gonna ramble about some of the stuff we got up to on the holiday, it nicely splits up into sections because of the way we did it. So, yeah, here we go!

We arrived in New York rather later than we’d hoped, mostly because of the crazy traffic getting into the city. We ended up in a shuttle from JFK Airport in Queens which was taking us and other people to hotels in the city during rush hour. It was pretty hard going.
The last time we stayed in New York, Terry and I booked a pretty swanky hotel, so we were looking to spend a little less on the hotel this time. To be on the safe side we booked two hotels so if one sucked we wouldn’t be in it the entire holiday. Of the two hotels we stayed in the first one was definitely the shadiest, so I’m glad we got it out of the way! We stayed at the Pod 51 hotel for the first few nights.
As I look at the site I feel even more disappointed by how much it didn’t look anything like the images. Our room was one of the ‘better’ tier ones and we ended up upgrading further so we actually had enough space for two people who didn’t want to sleep on top of each other to kip. The rooms are crazy tiny, but when we upgraded there was enough room to manage for the first few days.
The hotel did have an amazing view of the city however, here’s the view from the roof terrace: 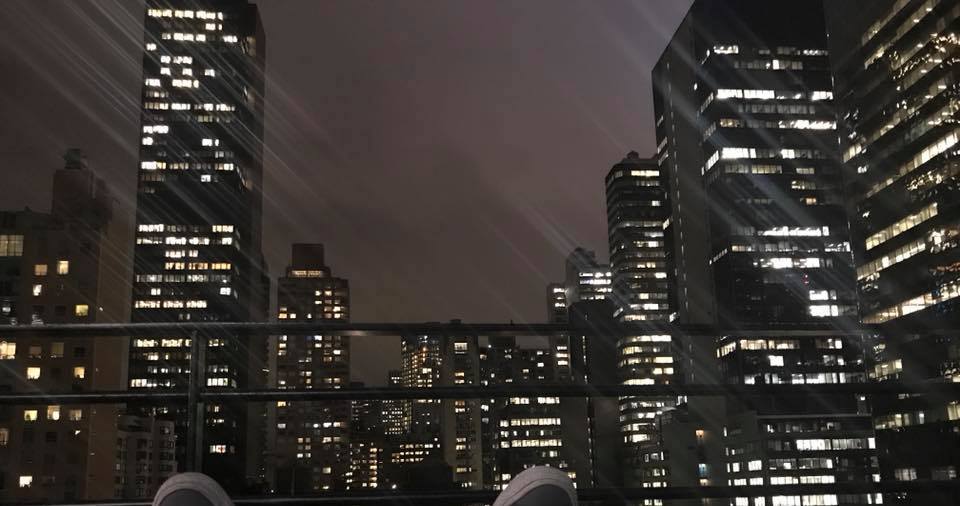 Our first days mostly consisted of trying to get used to the timezone, most early days we were up at like 5-6am and struggling to find things to do because not many shops were open until 10am. It meant we could enjoy a quieter side to NYC and wander around the park in the morning though. I also had a bagel from a cart. It was pretty good…
Because of our messed up sleep we decided to make an impromptu visit to Washington DC on our third day. A 3am Greyhound got us into Washington around 9am. From there we did a hectic sight seeing tour of all the things we could find, which turned out to be the Whitehouse, the Lincoln Memorial, the Martin Luther King memorial, Washington Monument and a really nice World War II memorial garden/fountain area. It was a lot to cram in because we only had until 4pm when our bus was taking us back, but we saw some amazing sights we’d probably not get to see again unless we really tried.
Something I was kinda chuffed about which is pretty nerdy but I’ve never seen this before; is that most of these locations had gift shops with little ‘knowledge cards’, so they were like revision cards with snippets of American history information on them. Why doesn’t every gift shop in the world do that? Anyway I bought a bunch of those. Terry flipped off the White House because Trump, we went to the Hard Rock Cafe while we were there. Then readied ourselves for another five hour drive back to the hotel!

Part 2: Meeting up with Joe and Nicole

So after the DCL meet up in Chicago last year I really wanted to make the effort to see some of my American friends most often. I’m aiming for once a year depending on whatever’s going on. We chose New York because Joe and Nicole live there, who are two of my best DCL/Neopets friends.
Nicole and Joe had actually never been to NYC either, they live about four hours upstate and previously lived in Canada, so they just hadn’t been to the city yet. It was a great opportunity to get them into the city though, and we had a blast! 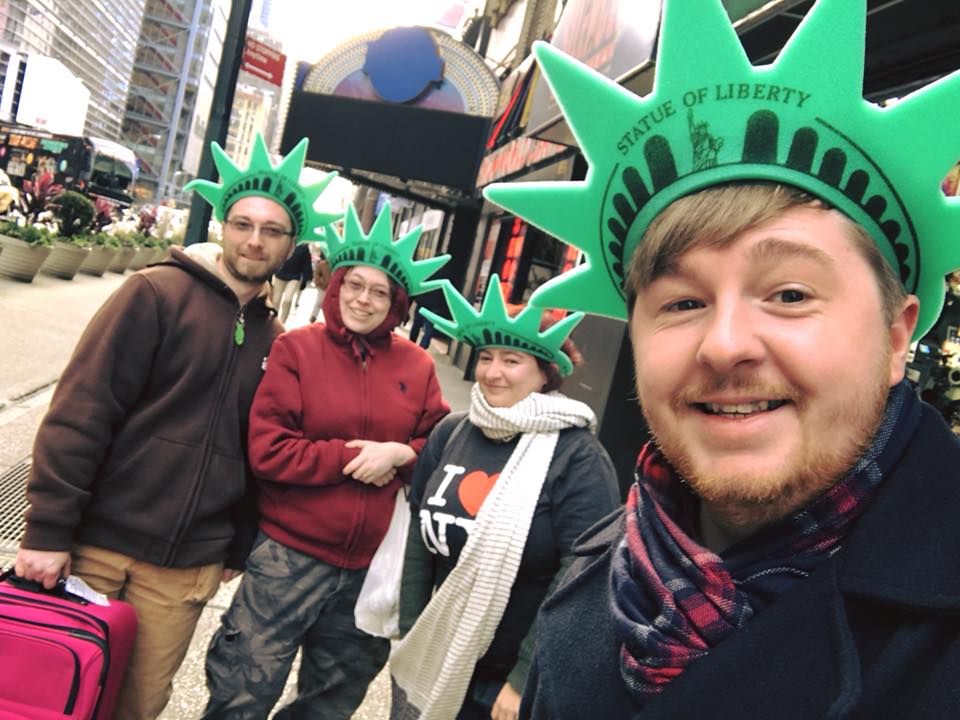 For the most part this section of the holiday was us just hanging out around the city. We moved right by Times Square and into the Row NYC Hotel.
I much preferred this hotel, and I’m pretty sure after the upgrade we did in the Pod Hotel it ended up being cheaper at the Row. This hotel was very much ‘what you get is what you see’ from the website. Pretty basic but there was more room, reasonable sized beds and it was pretty standardised, kind of like an Ibis budget/premier inn type thing going on.
We had a four person room whilst Joe and Nicole were with us then Terry and I downgraded to a two-person room when they had to go back. Both rooms were pretty nice and for the location it was just really great value.
One of the best days was the day we all went to the American Museum of Natural History. Nicole was dying to go here, and I love a good museum myself, especially ones with animal junk in. We saw SO MUCH. It literally took us the whole day. The museum opened at like 10am and closed at 6pm and we were there for the entire time.
We mostly hung out by the dinosaurs, because you know I was hanging out with my dragon friends and that’s as close as we’re getting to the real thing, right?
One day we walked all the way from Times Square to the bottom of Manhattan to see the Statue of Liberty. We could have got a taxi but I didn’t want to miss anything fun we could have seen. We ended up seeing ‘The Sex Museum’ which turned out to just be an adult shop and what I thought would have been a little giggly museum visit turned real dark fast.
Anyway, we also got to see Ground Zero, and the 9/11 Memorial. Which was pretty stunning, I think we were pretty much silent the entire time we were there. It was really intense to see the pools where the towers once were amidst all these humongous skyscrapers. The contrast of that quiet area admits the craziness that is New York was pretty powerful and brought back the feelings from back then. It’s good to remember, though.
We finally reached the statue, well, as close as we could get without switching islands. I actually really wanted to see it by then so Terry and I got a ferry later in the holiday to see her properly.
We also played a bunch of Cards Against Humanity, because we’re slightly horrible people. It was a good laugh and many beers were had.

Sadly we could only get Joe and Nicole over for the weekend, so they had to return Monday morning. Leaving Terry and I to get up to more trouble by ourselves!
BUT WAIT OH YEAH! That afternoon, we went for drinks and I found out another one of my Neopets/dragon friends had just moved to NYC THAT DAY! I’d never met my friend Rose before, so I was pretty darn stoked to get to see her the next morning for a coffee and a catch up.
She also helped us with some handy tips on how to get discounted Broadway tickets, you know, until we got tipsy and decided to just go all out and but Wicked tickets! That’s right! I FINALLY saw Wicked. I’ve only gone on about needing to see it for what, six years?
So awesome. One of our last meals in Manhattan was at Katz Deli, which Simon recommended to us. The BEST deli sandwiches you’ll ever have. I might miss there the most.
The final few days of the holiday saw us moving over to Brooklyn; Terry wanted to get a feel for a more ‘real’ New York, and rumour had it that Brooklyn was great for local bars and restaurants. We were actually pretty exhausted by this point, so didn’t see quite as much as we wanted.
There was however that dodgy trip we made down to Coney Island – Think of it as Brooklyn’s Blackpool. Only it was completely dead as we went in the middle of the week and in the evening. It was eerily quiet.

One thing I LOVED was a nearby bar called Barcade, which, as the name would suggest, was a bar and arcade mash up. Real retro games (not bloody Playstation that’s not retro seriously) – there were machines with Q*Bert, Frogger (which I OWNED at both and got high scores), Ms Pac. Man and Smash TV to name just a few. They had a really nice selection of local ales as well. We had a blast there!
By the end of Barcade day I started to get quite ill, but luckily it was the last day! We had some amazing food in a cafe I never took the name of. D: And I had a horrendous flight because I was full of a cold by then. New York was really cold the entire time we were there.
Oh oh, something I meant to mention; during the holiday we got into the habit of picking up random Christmas tree decorations, I think we spent most of our money on these souvenirs actually. But we got some really cool stuff, here’s just a few of them:

We also got an avocado and Hard Rock guitar. We bought so many Hard Rock pins from the New York and Washington DC stores.
Uhh, I think that’s all I have energy to write for now, that traitor Siobhan is knocking on the door so I’m out. Laters! 😀