Aside from the Logic Lines post a few weeks ago I haven’t really felt much up to blogging, drawing or websiting lately. Half because of awesome new games, and half because of silly personal reasons draining my creativity which I won’t go into too much. I’m feeling somewhat better hence the attack of new website stuff.
I completed NanoWriMo, which is amazing, turns out when I’m over-thinking it pours onto creative writing surprisingly well. My NanoWriMo project was a series of short stories starring my dragon characters. I’ve had many of said stories in my head for years, and I finally got most of them onto paper.
They need a touch up, but as I edit them I’m going to post them into a new section on my site. That’s the main reason for the new layout, I have new ideas and sections to add to my site.
The gaming blogs will go into a new section, I’m actually thinking of taking out a new domain name altogether for them, since they don’t really fit in with my personal site. I’m also going to have special, full sections for my artwork, coding, Albinotoons and the new story section. It sounds like tons of work, but I’ve got ideas in my head for how I can keep on top of things.

For the most part, things are super good with myself at the moment, so I’m only gonna do a couple of resolutions.
1. Blog/Website more. – I should probably also include not using the word ‘website’ as a verb anymore. 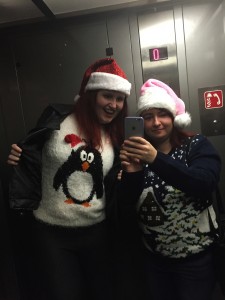 2. Have confidence. – 2014 has really highlighted this for me, an intense lack of confidence needs to be addressed. So I’m going to start having more courage to talk about things out loud and generally not being a coward at life.
3. Usual diet crap. – I joined a gym. Might be good if I actually went.
That’s it really, I don’t have much I want to achieve in the short term except for a much needed improvement in the confidence department. I get far too scared thinking about how people might react to things I say or do.
Work and stuff is going great, Siobhan and I decorated the office (poorly) last week. We also rocked our Christmas jumpers!
I’m really, really looking forward to January; Garfy is coming down to England and we’re gonna have an awesome time. 😀 There’s holiday plans and fun times expected. Hopefully we get to do everything we want.