So for Terry’s birthday I took him to Winterfell, or more accurately I took him to Dublin so we could visit where Game of Thrones is filmed. It was a really great day!
We did spend the weekend in Dublin, but I don’t want to focus my blog post on that (mostly because all we did was drink and a seagull crapped on me right in the middle of a busy street. The horror!) So I’m just going to rave about the tour we took.
I came across The King in The North Winterfell tour when browsing general Game of Thrones things online. It was a perfect birthday present idea! So I just went for it. Something worth noting is that whilst the plane and tour were of a reasonable price; staying over in Dublin was super expensive because The Script were having their largest gig to date on the same weekend. So when I bought the tour and plane tickets BEFORE checking hotel prices I got a little screwed.
We ended up staying in Hotel Metro Dublin Airport, which is about a ten minute drive from the Airport and fifteen minutes or so from Dublin Centre. It’s a really nice hotel with reasonably priced food and drink, we’re talking around 10 Euro for a main meal and 5 Euro for a drink. Drink prices are pretty standard throughout Dublin, but it’s no dearer than any town center.
Anyway on Sunday we got a cab into Dublin early in the morning because we weren’t replying on the bus to get us to Jury’s Inn on time. Buses are really cheap by the way so traveling to Dublin Center wasn’t an issue for us at all.
We set off at 8am in what must be the comfiest coach I have ever been in. It was well ventilated, with soft comfortable leather seats. The tour guide, Rob, kept us occupied and well entertained for the two hour drive into Belfast. He told us some local history, we had a Game of Thrones quiz and watched a few behind the scenes pieces of footage on the TV in the coach. Needless to say two hours flew by. Actually, we had to de-tour because of a bike race event going on in Dublin that day so it was closer to three hours, still, Rob made sure we were well entertained!
We finally reached our first trek location, we went to Tollymore Forest to do a tour of the locations where some key scenes for season one were filmed. We saw the location where Ned Stark and the boys found the dead stag and dire-wolf pups. We saw the remains of a campfire which was actually used by Jon and Tyrion, and we saw where the opening scene was filed with the White Walkers. It sounds like we just looked at a bunch of pointless forestry, but Rob provided us with clips held up on his iPad which displayed the scene and he made sure we stood in the same position as the camera in order to get a full feel for Westeros. It was pretty neat.
The trek was awesome, but left us hungry and exhausted. The next stop was Paddy’s Barn for our meal. Rob had us fill in a form on the journey there so our food could be rang in and ready for us when we arrived. Terry and I had a Sunday Roast, honestly, the roast was great, but everyone else’s food looked so good I’d have to try something else next time. The Fajitas looked immense.
After the meal we were greeted by some familiar faces outside. None other than Summer and Grey Wind! We met the actual dogs who played the dire-wolf cubs. They belong to a local family who have had some cameo appearances in the show. Meeting the wolves and getting pictures was definitely a highlight! 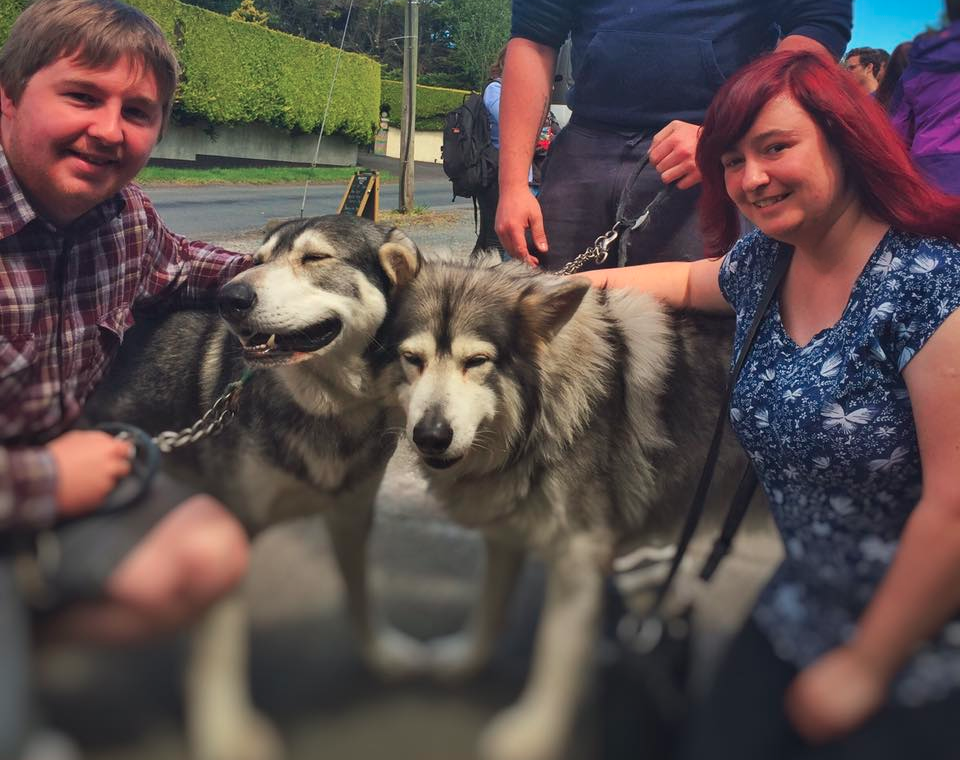 After playing with the dogs we boarded the coach to go to Winterfell. This was our second trek, we visited the road where Brienne and Jaime traveled down, saw The Twins and had a sneak peak at some Season 6 locations. Nothing that gave us any spoilers though. 😛 We finished up in Winterfell and took a bunch of pictures. The location itself is heavily photo-shopped on the show so Rob’s iPad visual aids helped us get a feel for it once again.
Our tour ended in the ruins of Inch Abbey, which is where Robb Stark’s bannermen pledge fealty to him as ‘King in The North’ The winner of our earlier quiz had the honor of being our Rob Stark. The coach was filled with Stark-style cloaks, swords and Terry even wore The Hound’s helmet. We got some cracking pictures here. Everyone on the tour dressed up and we held some replicas of swords from the show.
When everyone was done getting their pictures we went back on the coach home, another two hour journey but Rob played us episodes one and two of Game of Thrones so we could see the locations we had been to in action. Admittedly most of us slept through the first one though because treks are hard work!
Terry and I finished the day by having some food and drink back in Dublin. I’d highly recommend the tour, for the price and the amount of time and effort the team put into it, the tour was definitely worth more than what we paid.
More pictures to come later, Terry took them all on his phone!