So last weekend a bunch of us travelled down to Newton Abbott in Devon to see Nathan and Jo. It’s our first time seeing them since Nath moved down there in summer last year. The trip was awesome! But I also had some very ‘special’ moments while I was down there. So here’s a blog post about our adventures!
Steph drove myself, Terry, Henry and Natalie down. Along with all our stuff for saying over Friday until Monday. Yaya (Steph’s car) was super cramped but I think we managed the trip well enough. We stopped by Burger King in Bristol or somewhere around there and it was horrible. 😐 Aimee (Steph’s sister) had also been editing our Spotify playlist for the trip the previous night so we had some weird as hell music to listen to on the way down. Usher is still a thing?
The first of my many fails came when I was half listening to some story about bears in Camp America. Somehow my friends managed to convince me that bears were native to Devon (how the hell I believed this I don’t know, I put it down to sleep deprivation.) Jo convinced me her teaching whistle was around her neck to ward off bears. :/
On top of that, Nath and Jo had this funky looking lamp, and they explained that it’s voice activated. So I promptly yelled ‘Lamp on!’ to no avail. They switched it on and demonstrated that it just blinks when someone makes noise. Pretty dumb. Anyway my bear and lamp fail became a running joke for most of the weekend.
On the Friday we had a lazy day in, we got local takeout (amazing Chinese!) and played Articulate. Jo and Nath aren’t the serial alcohol abusers the rest of us are so we always tend to have wholesome family fun when we spend time with them. Anyway Terry and I came last, apparently wizards and hermits are the same thing?
The Saturday started off alright, we went to Trego Mills, which I can only explain as the Devon equivalent of Ena Mill. It sold everything imaginable from fur lengths to hunting guns. We dicked about in there for most of the morning and then went to a park and play area nearby.
The park had a few arcades and rides, notably there was a bumper car race track. This was easily my biggest fail of the weekend. Natalie and I went first (we went on in twos) and both os us managed to crash our cars right away. It wasn’t so bad, we picked up and started driving quite well. I then proceeded to get cocky and overtook Natalie when I saw an opening. Feeling super skilled I sped up, and drove the car directly into the wall.
It hurt like hell, but I was able to finish the race. Then when I got out, some guy came over and dragged my bumper car off the road. It was in maintenance for the entire time whilst my other friends had their races. So there is every possibility that I somehow totalled a bumper car during this trip. 😐 I have no words. We got the heck outta there.
On the way out Terry used a selfie stick for the first time, here’s a picture of us with a dragon! 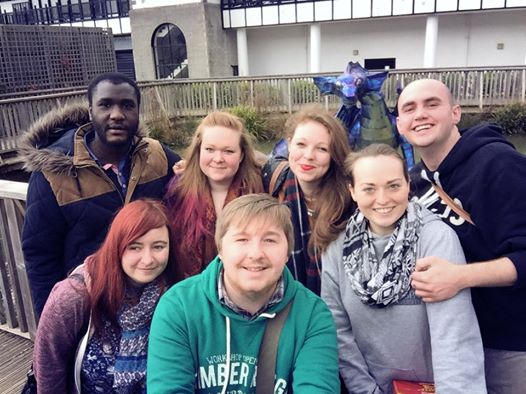 After terrorising the play area we drove to… Some hill? It had a name… But I didn’t get it. The hill was massive, it was Nath’s way to showing us what a rural town is like. We nearly died from exhaustion climbing up the thing. Got some pictures, and went down, I strangely enjoyed this pointless moment in the trip.
Later that night we went for food in a local pub, which sold gigantic meals, it was epic, and finished the day off with a trip to ‘Ye Olde Cider Bar’. Which sold, would you believe it, cider! But the drinks were so strong it was genuinely painful to have them. Drinks should not taste like cheese. Apparently the flavoured wine was good though.
We finished that evening with Cluedo, which I also lost at. 😐 I was convinced Colonel Mustard was the bad man!
On the Sunday we went to the beach, played on the pier and had one of Nath’s amazing Sunday lunches, and Eton Mess for dessert. It was epic! Nothing too noteworthy in terms of fails and stuff though. 🙂